T-G-Consulting, Inc.
×
コンテンツに移動します
×
Gorleben nuclear waste facility in Germany to close
Germany's Environment Ministry has announced that the controversial Gorleben mine will be shut down after four decades as a nuclear waste storage facility. In the meantime, Germany continues to search for the perfect permanent waste disposal site, with vetting underway for 90 candidate locations identified so far.
Full Story: Deutsche Welle (Germany) (9/17) 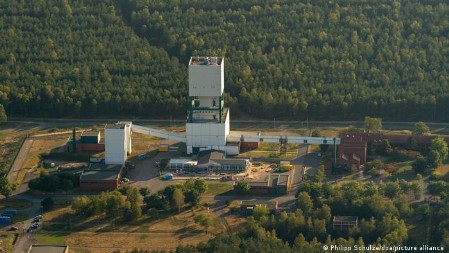 Byron Generating Station (Jeff Haynes/AFP via Getty Images)
Byron, Dresden saved by the bill?
With only days remaining before the scheduled retirement of Exelon Generation’s Byron nuclear plant, the Illinois House approved a comprehensive energy package that would save that plant, as well as the state’s similarly struggling Braidwood and Dresden facilities.
Read More Nuclear News (Fri, Sep 10, 2021) 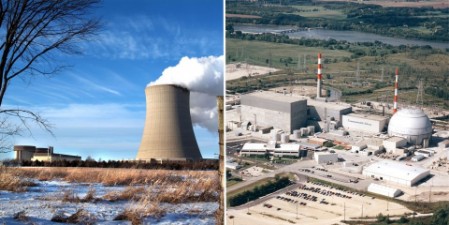 Taishan-1 taken off line because of fuel rod damage 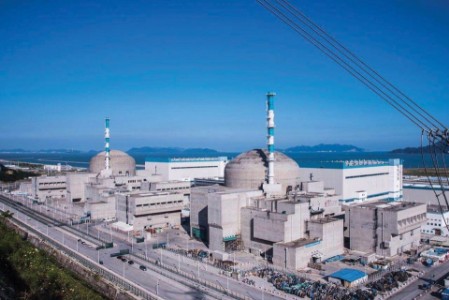 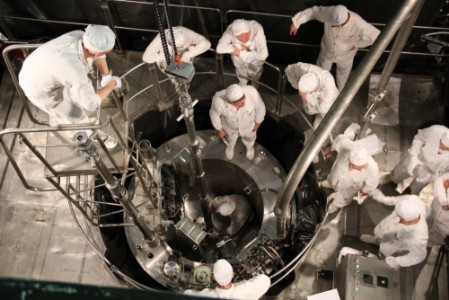 Technicians loading the first reactor aboard the Akademik Lomonosov, Russia's floating nuclear power plant.
Credit: Rosenergoatom
Tue, Aug 3, 2021, 2:00AM Nuclear News
Unit 1 at the Taishan nuclear power plant in China has been shut down to examine fuel rod damage and conduct maintenance, China General Nuclear Power Group (CGN) reported last Friday.
Taishan, located in Guangdong Province, is home to twin 1,660-MWe EPRs, the first two such reactors in the world to enter commercial operation (in December 2018 and September 2019, respectively). The plant is owned and operated by Taishan Nuclear Power JVC (TNPJVC)—a joint venture of CGN; France’s EDF, which is also the majority owner of Framatome, the Taishan reactors’ designer and supplier; and the Guangdong Energy Group.
“At present, a small amount of fuel damage has occurred during the operation of Taishan Nuclear Power Unit 1, but it is still within the allowable range of technical specifications, and the unit can continue to operate stably,” CGN stated in its announcement. “After full communication between Chinese and French technical personnel, [TNPJVC] insists on safety first and conservative decision-making in accordance with nuclear safety regulations and nuclear power plant operating procedures …. The unit will be shut down for maintenance, find the cause of fuel damage, and replace the damaged fuel.”
Russia's Rosatom to build 4 more floating NPPs
Russian state-owned Rosatom nuclear corporation plans to build four new floating nuclear power plants, with each operating a pair of 55-megawatt RITM-200 reactors for use at the Baimsky copper mining project in northeastern Siberia by the end of 2026. Three of the reactors will be deployed to the site, with the fourth to be held in reserve to fill in when any of the three require maintenance. Full Story: Bellona (Norway) (8/4)
Taiwan NPP files application to shut down
Taiwan's Atomic Energy Council says it has received an application from state-run utility Taiwan Power Corporation to shut down the Third Nuclear Power Plant, located near the resort town of Kenting. Taiwan plans to be nuclear-free by 2025 and Taiwan law requires that an application for closure be filed at least three years prior to ending energy production at a plant. Full Story: Taiwan News (7/27) 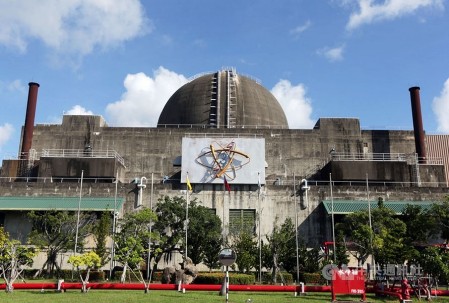 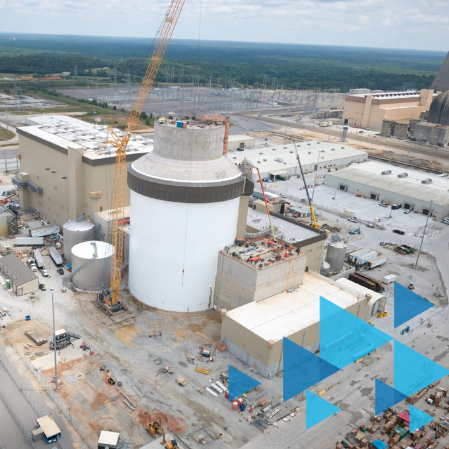 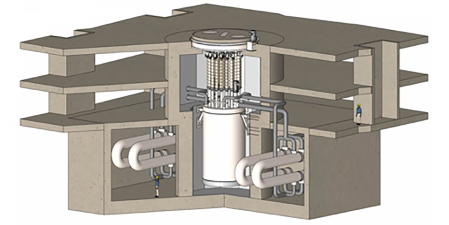 Federal subsidies for nuclear plants?
Thu, May 6, 2021, 5:01AMANS Nuclear Cafe
The Biden administration has indicated to lawmakers that it supports federal subsidies for struggling nuclear power plants, Reuters reported this morning, citing sources familiar with the discussions.
The subsidies would be in the form of production tax credits, according to the report, and would likely become part of the president’s $2.3 trillion infrastructure plan.
“There’s a deepening understanding within the administration that it needs nuclear to meet its zero-emission goals,” states a Reuters source.
Last month, during the Leaders Summit on Climate, President Biden announced that the United States will target reducing greenhouse gas emissions by 50–52 percent by 2030, with the goal of achieving net-zero emissions by 2050 at the latest.
Surry NPP in Va. receives 20-year operating extension

The Nuclear Regulatory Commission has extended Dominion Energy's operating licenses for Units 1 and 2 at its Surry nuclear power plant in Virginia until 2052 and 2053, respectively. A previous license extension granted in 2003 allowed the two reactors to operate until 2032 and 2033.
Full Story: Virginia Business (5/4),  Power Engineering (5/4)
Plans for Fukushima water disposal to be revealed
Plans to release water from the Fukushima Daiichi nuclear plant into the Pacific Ocean are moving forward, with an announcement expected this week from the Japanese government. There are about 1,000 water storage tanks at the site, expected to reach storage capacity next year.
Full Story: The Associated Press (4/9) 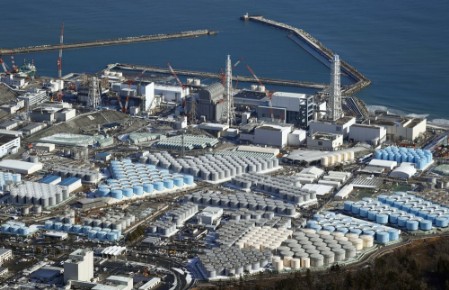 TEPCO to delay restarting plant
Tokyo Electric Power Company has agreed to penalties handed down by the Nuclear Regulation Authority for lax security measures at its Kashiwazaki-Kariwa nuclear power plant, which will delay restarting the plant for at least a year. TEPCO, which also owns the Fukushima Daiichi power plant, will reduce pay for top company executives as part of the agreement.
Full Story: The Associated Press (4/7) 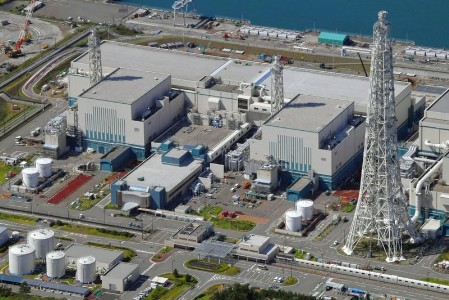 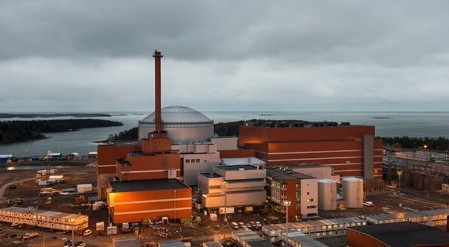 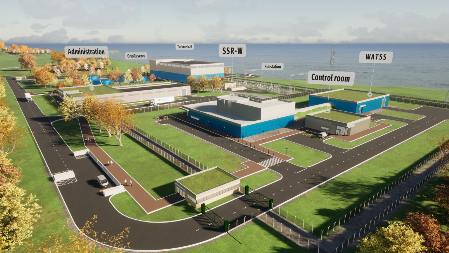 Expert panel looks back at Fukushima 10 years later
Join us this Tuesday!
ANS invite to a special discussion that revisits Fukushima on the eve of the 10-year anniversary. Sign-up now for this free event this Tuesday, March 2, 1:00 - 2:30 pm EST.
The earthquake and subsequent tsunami that caused three reactor meltdowns at Fukushima Daiichi on March 11, 2011, forever changed the nuclear power industry in Japan and worldwide.
A distinguished panel will discuss the lessons learned, the decontamination and decommissioning approach, and future challenges. The panel, which features several principal members of the ANS Special Committee on Fukushima, will also examine what the committee got right and what it got wrong in the Fukushima Daiichi report.
Panelists
Lake Barrett, Senior Advisor, TEPCO and IRID
Michael Corradini, Distinguished Professor Emeritus, University of Wisconsin-Madison
Paul Dickman, Senior Policy Fellow, Argonne National Laboratory
Dale Klein, Former Chairman of the Nuclear Regulatory Commission
Joy Rempe, Principal, Rempe and Associates, LLC
Study finds Estonia’s geology suitable for borehole repository
A preliminary study conducted by the nuclear waste storage and disposal startup company Deep Isolation found that Estonia’s geology is capable of safely hosting a deep horizontal borehole repository for radioactive waste from advanced nuclear reactors.
The study, commissioned by advanced reactor deployment company Fermi Energia, found no fundamental geologic limitations to disposing of nuclear waste in deep horizontal boreholes, according to Deep Isolation. In addition, the study noted that a wide range of locations could be demonstrated to comply with International Atomic Energy Agency regulations for geologic disposal.
The findings: Results of the study, which was conducted in collaboration with Estonian geologic and drilling company Engineering Bureau STEIGER, will be presented as part of Fermi Energia’s one-day conference on small modular reactors, "New Generation Nuclear Energy in Estonia," on February 9. Registration for the event is available online.
Study details: The study is a qualitative geological assessment of Estonia’s crystalline basement rock that evaluates geological conditions and potential risk factors for Estonia’s 15 counties, screening their potential for hosting a deep borehole repository. Such a repository would isolate radioactive elements from the earth’s surface for 1.3 million years, according to Deep Isolation.
Fermi Energia is developing plans to build a SMR in Estonia. Deep Isolation said that Fermi Energia is the first European company it has contracted to conduct a preliminary geologic study to manage advanced reactor waste.
Quote: “If we are to be successful in our efforts to see Estonia become the first European Union country to deploy an SMR in the 2030s, it is important that we take responsibility now in planning for spent fuel disposal,” said Kalev Kallemets, chief executive officer of Fermi Energia. “This Deep Isolation study indicates that a deep borehole disposal repository could meet all prerequisites and be safe and cost-effective as well as easily deployed and scalable.”
第5回廃炉創造ロボコン
日時 １月２４日（日）９：００～（LIVE動画配信）
https://www.youtube.com/channel/UCBa8hWwCAo1zbdyPnMUCAXQ
主催 国立研究開発法人 日本原子力研究開発機構
廃止措置人材育成高専等連携協議会
後援 復興庁 文部科学省 経済産業省
国立高等専門学校機構 福島イノベーション・コースト構想推進機構
原子力損害賠償・廃炉等支援機構 国際廃炉研究開発機構
福島県 いわき市 広野町 楢葉町
日本ロボット学会 日本原子力学会
特別協賛 (株)アトックス 日立ＧＥニュークリア・エナジー(株）
技術者育成いわき経済活性化グループ
協賛 木村化工機(株)
事務局 福島高専
なお，午後からは一般公開で自由に視聴可能です
DOE expects 2021 to be important for nuclear 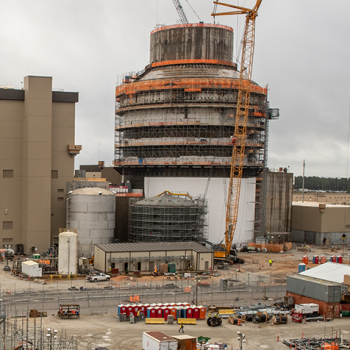 The Department of Energy's Office of Nuclear Energy says that even with the COVID-19 pandemic, 2020 saw many historic advances for the US nuclear industry, and it expects 2021 to be a record-breaking year. The agency says the top five projects to watch include the grid connection of Vogtle Unit 3, the first SMR full design certification, landing of the Mars rover Perseverance, establishment of a uranium reserve and more license renewals and reactor shutdowns.
Full Story: ANS Newswire (American Nuclear Society) (1/19)
1. VOGTLE UNIT 3 CONNECTS TO THE GRID
Unit 3 at Plant Vogtle Construction Project
All eyes this year will be on Georgia’s Plant Vogtle expansion project. Unit 3 remains on track for a November 2021 startup despite some testing delays due to COVID-19. The two AP-1000 reactors under construction are the first new units to be built in the United States in more than 30 years. The U.S. Department of Energy’s Loan Programs Office provided more than $12 billion in loan guarantees to help complete the Vogtle expansion project, which will be the nation’s largest source of clean power. Unit 4 is expected to be online by 2022.
SMR-wind project to be developed on Welsh island, UK
NuScale Power has signed a memorandum of understanding with British firm Shearwater Energy to develop a hybrid energy project that combines small modular reactor technology and wind power on the island of Anglesey, off the coast of Wales. The plant would be used to power about 300,000 homes and generate 6.6 million pounds of "green" hydrogen gas.
Full Story: BBC (free registration) (1/15),  ANS Newswire (American Nuclear Society) 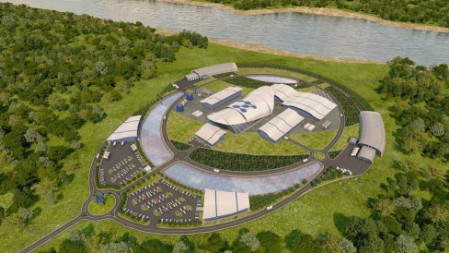 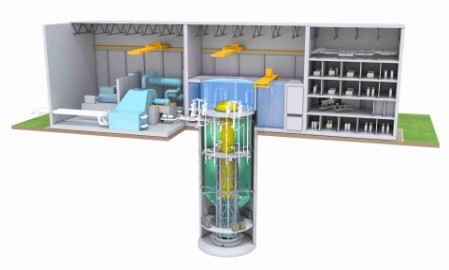 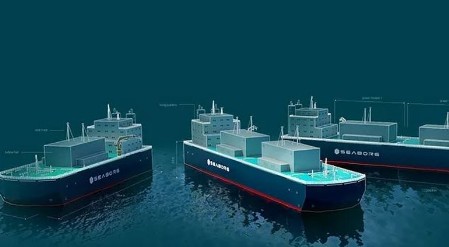 Nuclear Waste Startup Gets Backing for Underground Storage Holes
Will Wade and Catherine Traywick, Bloomberg News
(Bloomberg) -- Deep Isolation Inc. raised $20 million from backers including NAC International Inc. to develop its system for storing deadly nuclear waste miles below the surface of the earth.
As part of the Series A funding round, NAC will also get a seat on Deep Isolation’s board, according to a statement Wednesday. The deal values the Berkeley, California-based company at $60 million.
Deep Isolation hasn’t yet received a license from the Nuclear Regulatory Commission for its borehole technology, and the firm doesn’t have customers that have agreed to use it. But potential clients have expressed interest in the idea, the company said.
“We need clean energy,” Chief Executive Officer Elizabeth Muller said in the statement. “In the case of nuclear power, this means finding a permanent solution for nuclear waste.”
Deep Isolation estimates that the global nuclear-waste disposal market is worth $660 billion. While there’s wide consensus that spent fuel rods should be stored deep underground, the only U.S. proposal for a national repository in Nevada has been stalled for decades because of local opposition. The company’s technology addresses this issue by proposing to bury waste near reactors, as an alternative to existing above-ground storage sites.
NAC International is a Georgia-based nuclear services company that’s been working with Deep Isolation since last year.
©2020 Bloomberg L.P.
US firms discuss taking over Welsh NPP project
A consortium of US companies that includes Bechtel, Westinghouse and the Southern Company is in talks with the British government to revive the abandoned Wylfa Newydd Nuclear Power Station in Wales. The consortium's plan is to meet the original construction timeline for the project and deliver power at a "market competitive price" per megawatt hour. Full Story: City A.M. (London) (11/10),  WalesOnline (U.K.) (11/10)
＜注：この原発は、ホライズン・ニュークリア・パワーが既存の発電所敷地の南部に改良型沸騰水型軽水炉(ABWR)を建設することが計画されていたが、2020年9月に計画撤退が表明されている＞ 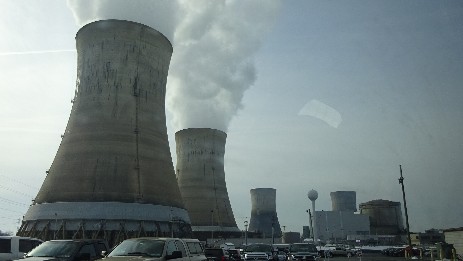 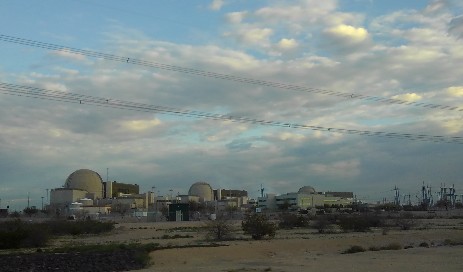 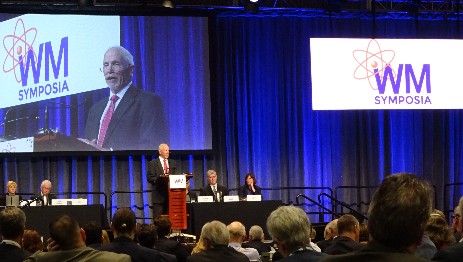 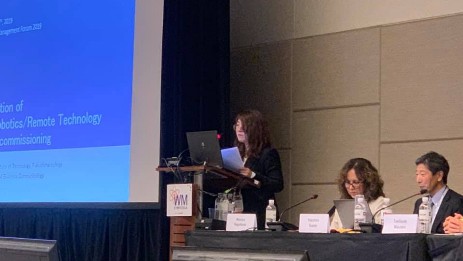 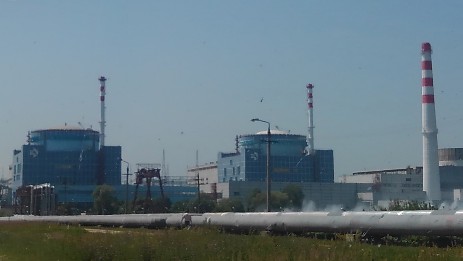 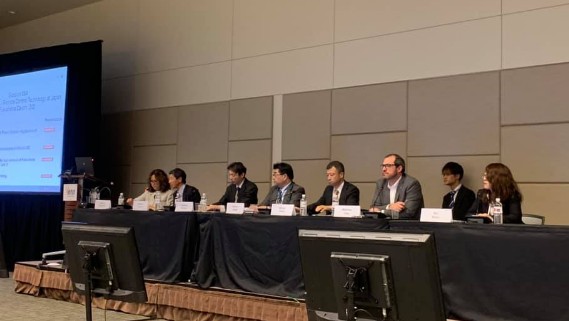 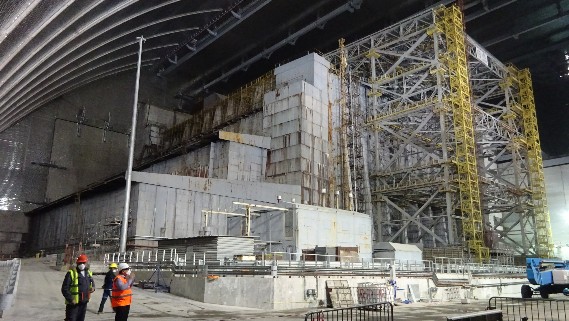 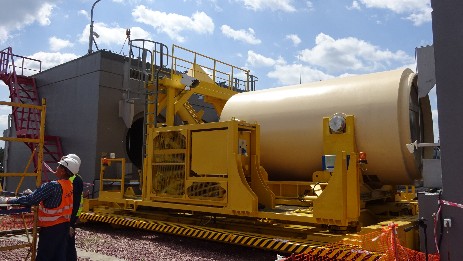 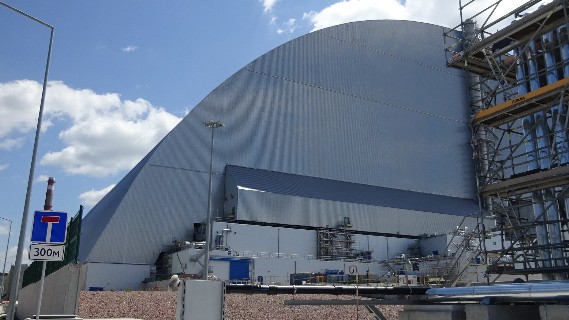